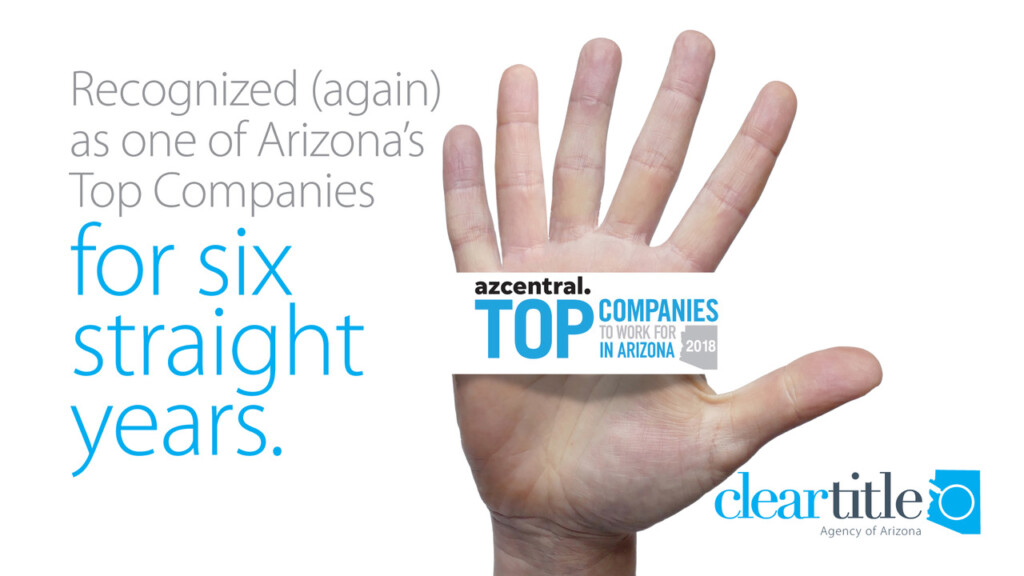 “Being recognized as one of the top companies in Arizona shows that we as a team embrace the culture and values at Clear Title,” said Jim Clifford, President of Clear Title Agency of Arizona. “We don’t just say it, we live it every day. We truly are a family at Clear Title. We care about each other and it shows. It is that family value system that sets us apart from others in the industry.”
Clear Title Agency of Arizona includes a team of more than 65 members throughout eight branch locations. Last year it acquired a 25,000-square-foot building at 2901 E. Camelback Rd., to house its main office.
Clear Title’s philanthropic endeavors include raising money for the Boys & Girls Clubs of the East Valley and the Maricopa Health Foundation, which benefits the programs of the Maricopa Integrated Health System (MIHS).
ABOUT CLEAR TITLE AGENCY OF ARIZONA
Locally owned and operated, Clear Title Agency of Arizona provides quality title and escrow services statewide and is underwritten by First American Title Insurance Company. Balancing a strong commitment to great personal attention and fast, dependable settlement services, Clear Title is a leader in the title and escrow industry. Working to build long-term relationships by providing customers with a high level of service, market expertise, and transactional support, Clear Title is backed with the people and processes to deliver.  Clear Title specializes in Residential and Commercial Title and Escrow services. For more information, visit www.cleartitleaz.com.